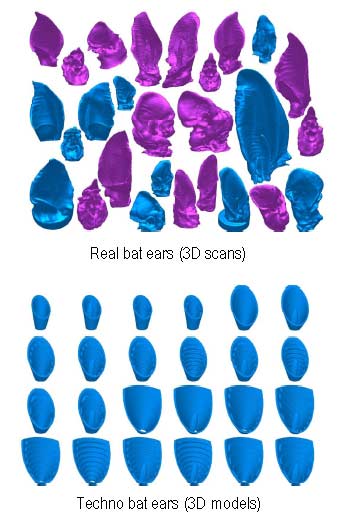 To clarify, a global consortium of researchers (co-ordinated via the Active Perception Lab at the University of Antwerp, Belgium ) spent 38 months constructing and testing a bionic bat head called the Chiroptera Inspired Robotic CEphaloid (CIRCE).
Much like a real bat head, the bionic bat head has moveable pinnae which can rotate and lock-on to ultrasonic echo location pulses.
The techno-ears were constructed to mimic the shape of real bat pinnae which had been 3D scanned in Hong Kong (see graphic). “These experiments show that a fairly simple sonar device can extract more spatial information about realistic objects in its direct surroundings than is conventionally believed.” – say the research team. Their final report on the project (completed in 2006) can be read here.