“In contrast with simple liquids such as water, milk, honey, which easily flow as a continuous jet when poured from a vessel, pasty materials such as mayonnaise, mustard, ketchup, puree, etc., fall by fits and starts in a wide range of flow rates.” 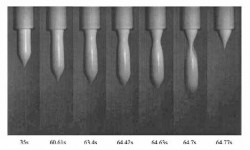 One of the very few formal studies to investigate such fits and starts was undertaken at the Institut Navier, Champs sur Marne, France, in 2005. Where investigator P. Coussot and colleague  F. Gaulard experimented with a concentrated emulsion (mayonnaise, Amora), an organic suspension (ketchup, Heinz) , a gel (hair gel, Vivelle Dop) and a mineral suspension (water-bentonite suspension, Impersol, Sud-Chemie). All were extruded from a large automated syringe dispenser in a gravitational field – and photos recorded the resulting ‘sausages’  (the image above shows the mayonnaise experiment).

“We have shown that generally the length of separation of a paste falling under its own weight remains constant and starts to increase at large flow rates.”

– say the team. It should be noted that this is far from being dry academic research – for there are practical real-world applications :

“Among others a practical consequence is that it is useless to increase the flow rate in order to avoid ketchup drip. This effect can only be avoided by continuously displacing the jet and keeping the orifice at a distance from the solid surface approximately equal to the separation length so that the sample always partly lies on the plate.”

Also see: the 2005 Ig Nobel prize for Physics: jointly awarded to
John Mainstone and the late Thomas Parnell of the University of Queensland, Australia, for patiently conducting an experiment that began in the year 1927 — in which a glob of congealed black tar has been slowly, slowly dripping through a funnel, at a rate of approximately one drop every nine years.