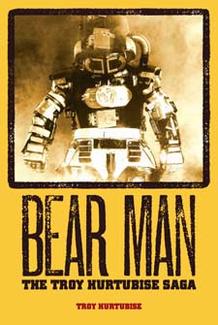 Troy Hurtubise, who was awarded the 1998 Ig Nobel prize in safety engineering for developing and personally testing a suit of armour that is impervious to grizzly bears, has a new book out.

Here’s a passage that brings together some of the main themes. Troy tells secrets about the most advanced version of his suit, the fruit of 15 mostly unfunded years of fevered research and development.

“Electronically speaking, the M-7 was right out of a movie,” he writes. “It sported an onboard viewing screen, an onboard computer built into the thigh cavity, a bite-bar on the right forearm, a five-way voice-activated radio system and an electronic temperature monitor. For protection against the grizzly’s claws and teeth, the M-7 boasted an entire exoskeleton made up of my newly developed … blunt trauma foam to dissipate the bear’s deadly power. Testing on the M-7 [was] short and sweet. A 30-ton front-end loader in fourth gear smashed me through a non-mortared brick wall and I suffered not a bruise. The world watched the test on CNN, and then came the sheer stupidity that nearly cost me my life, the fire test. My bear research suits were never designed for fire.”

Below: The trailer from the documentary film done about Troy’s early bear-suit research:

BONUS: Here’s a video of Troy musing about the new book: