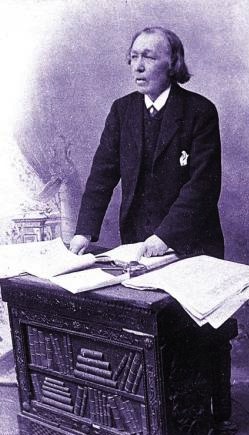 Tonight’s the night in Dundee! Three Ig Nobel Prize winners AND a revelation that is of absolutely no importance, but of great and goofy enjoyment to many in the English-speaking world.

The revelation:  Several poems by the bad poet William Topaz McGonagall — poems that have never been published in any book — will  be recited in public for the first time in more than 100 years, and maybe ever.

The evening will conclude with everyone rising and reciting, together, the ending of McGonagall’s most famous poem,  The Tay Bridge Disaster. These concluding lines follow, inevitably, from the poem’s stirring opening lines:

“Beautiful Railway Bridge of the Silv’ry Tay!
Alas! I am very sorry to say
That ninety lives have been taken away
On the last Sabbath day of 1879,
Which will be remember’d for a very long time….”

TICKETS: There are just a few tickets still available for tonight’s historic event, at the University of Dundee.

This is all part of the final show of this year’s 2011 Ig Nobel Tour of the UK, for National Science & Engineering Week. The show will also feature brief talks by three Ig Nobel Prize winners (involving emergency bras, dead ducks, and Greco-Italian stone testicles), and other delights, some of which pertain to the nearly immortal scientist D’Arcy Wentworth Thompson.

CONTEXT: Read our recent Improbable Research column, in The Guardian,  about McGonagall, and watch this video of actor Billy Connolly reciting the The Tay Bridge Disaster poem atop a hill in Dundee during a snowstorm:

AND ON SUNDAY MORNING… There will be a group recitation of “The Tay Bridge Disaster” on Sunday, March 20, at 11:02 am, on a train as it travels southwards on the Tay Bridge. Anyone who would like to take part should purchase a ticket for the train*, and gather on the platform at the Dundee train station at 10:45 am. Further details to be announced here at http://www.improbablecom.wpcomstaging.com soon.

* If you want only to take the shortest possible train ride, get a return ticket for the next station, Leuchars. The train itself will continue on to London! Scheduled departure time is 11:02.

FURTHER NEWS: Two additional poems will be given their debut on April 18, at the Edinburgh Science Festival, after which all spectators will be invited to walk together to McGonagall’s grave for a respectful visit.