Q. Cats’ tongues and Lizards’ feet – what links them?

MIT’s Elasticity, Geometry & Statistics lab (EGS) specialises in – ‘Understanding the mechanics of thin objects’. Prompting them (along with colleagues at Virginia Polytechnic Institute and Princeton University) to undertake a now-famous 2010 study with the objective of explaining the mechanics behind cats’ lapping. (related press coverage: [1] [2] [3] [4])
Now the lab has broadened its portfolio of thin-object studies to include not only cats’ tongues, but also lizards’ feet. Specifically, the unusual capabilities of the Basiliscus genus of reptiles – the so-called Jesus Lizards – which can run on water.

“We consider two biological phenomena taking place at the air-water interface, the water lapping of felines and the water running of lizards. Although seemingly disparate motions, we show that they are intimately linked by their underlying hydrodynamics and belong to a broader class of processes called Froude mechanisms. We describe how both felines and lizards exploit inertia to defeat gravity, and discuss water lapping and water running in the broader context of water exit and water entry, respectively.”

– explain the research team in the latest issue of Communicative & Integrative Biology, Volume 4, Issue 2, March/April 2011. ‘On the water lapping of felines and the water running of lizards: A unifying physical perspective.’ 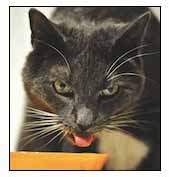 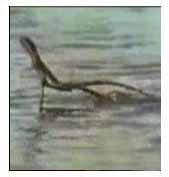 Click the pics to view a cat-lapping slo-mo film and a video of a lizard running on water.

*Frustratingly, Improbable has been unable to find a direct link (other than a circular one) describing Froude mechanisms. Any readers’ help much appreciated.