Sam Shuster adds, more or less, to the legend of Lord Brain and Dr. Head (the former of whom succeeded the latter, after a gap, as editor of the journal Brain, as we described yesterday):

My story is about the guy who taught me neurology, who was a little younger than Brain, and who, when he took the patient’s history acted the parts that had gone wrong, and in sequence. So his face would get palsied, his speech muddled, and he’d limp or stagger till there was a pair, patient and doctor with the full syndrome. He was a wonderful mime, and for the student, if not the patients, the effect was amazing. 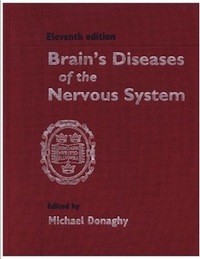 Evidently this copycatting was a neurological trick of the time, tho’, naturally,  Head appears to have led.

(Incidentally, I used Brain’s textbook as a student, and had some dealings with Brain later, over a missing PhD student of mine, who was smuggled out of the UK, but not before Brain saw him and thought he was “brain washed”, but that’s another story!)