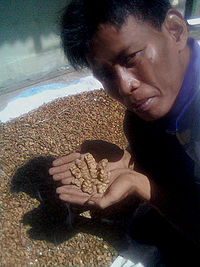 JAKARTA — Indonesia’s highest Islamic body on Tuesday abandoned a proposal to ban Muslims from drinking the world’s most expensive coffee, which is extracted from the faeces of a small mammal called the civet. It had considered issuing a fatwa against the rare coffee, made using beans picked out from the waste of the nocturnal, cat-like creature, on the grounds it was unclean.

“After a long discussion among clerics here, we decided that it’s not sinful for Muslims to drink the Luwak coffee,” the Indonesian Council of Ulemas (MUI) chairman Ma’ruf Amien told a press conference. “It’s not haram (forbidden in Islam) as long as you wash the beans with water to remove the civet cat’s droppings,” he said.

Locally known as Kopi Luwak, the beans come from the ripest fruits eaten by the civet, which are digested before being excreted and roasted. It is highly prized for its smooth flavour….

(Thanks to investigator Lou Lippman for bringing this to our attention.)