“Orthogonal” is the word we use on the rare occasions people ask “Are the Ig Nobel Prizes related to the Nobel Prizes?” The answer is: No. They are orthogonal to each other (and if people are still puzzled, we explain what “orthogonal” means). 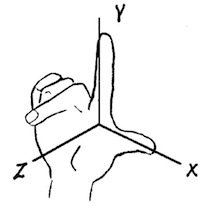 The Washington Post reported (thanks to investigator Tatiana Divens for bringing it to our attention) on January 12, 2010 that a group of officially learned officials were unfamiliar with the term:

Supreme Court justices deal in words, and they are always on the lookout for new ones. University of Michigan law professor Richard D. Friedman discovered that Monday when he answered a question from Justice Anthony M. Kennedy, but added that it was “entirely orthogonal” to the argument he was making in Briscoe v. Virginia.

Friedman again tried to continue, but he had caught the interest of Justice Antonin Scalia, who considers himself the court’s wordsmith…