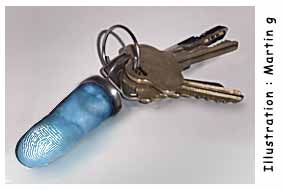 Shortly after the introduction of automated fingerprint recognition systems came the invention of fake fingers. As this research paper from May 2009 explains, fake fingers made from gelatine soon appeared, quickly followed by Play-Doh™. The authors review the “…state-of-the-art of fake finger materials and disclose the power of a, let’s say, brand new material in this field: Glycerin.“
Security analysts and biometric recognition-system manufactures have been investigating various methods to thwart the fakers using various techniques coming under the umbrella-term of  ‘Liveness Detection’. Several approaches have been tried – for example perspiration checks, movement analysis, and even odor detection. But all these methods need expensive physical modifications to existing machinery. In the ideal world, the Liveness Detection would be simply software based.
In order to investigate this possibility, the Department of Electrical and Electronic Engineering of the University of Cagliari, in cooperation with the Department of Electrical and Computer Engineering of the Clarkson University recently organised the First International Fingerprint Liveness Detection Competition – LiveDet 2009 – a challenge for fingerprint analysis software experts to come up with algorithms for Liveness Detection. Participants received fingerprint samples from real persons along with prints made by fake fingers built from “Play-Doh, Gelatine and Silicon [sic]”
The results are in.
And they can perhaps be seen as encouraging – no matter which ‘side you are on’. The winning system managed to identify the real prints with an accuracy of 85.4% – on the other hand though, this means that fakers could successfully bypass the software based biometric checks 14.6% of the time.