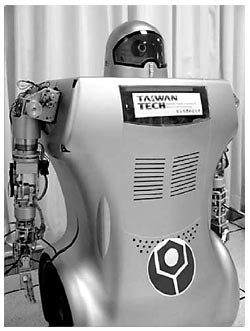 There have been several implementations of two wheeled balancing robots [example]. And several which can read sheet music via a camera [example]. Others can ‘sing’ [example] – but the number of two-wheeled balancing robots that can autonomously read music and sing songs is low – possibly numbering just one.
A research team from the Department of Mechanical Engineering at the National Taiwan University of Science and Technology in Taipei, Taiwan, (a.k.a. Taiwan Tech) have recently created one – which not only performs all the aforementioned activities – but can do so simultaneously.
The robot can sight-read the music and lyrics of four traditional Mandarin songs (Siao Mi Fong, Siao Sing Sing, Wo Ai Tai Mei, and Cian Li Zhii Wai) and can sing them with an accuracy of 98% whilst balancing on two wheels. “It demonstrated that a robot with integrated functions should be promising in entertainment applications in the future.“ say the team in their research article ‘The development of a music reading and singing two-wheeled robot’ which is to be published in the Journal of the Chinese Institute of Engineers, Vol 33, No 4 (2010)
Also from Taiwan Tech (2005), ‘An autonomous singing and news broadcasting face robot ‘