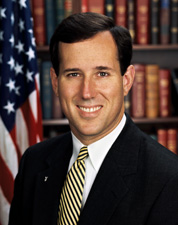 Like some of his colleagues, former US Congressman Rick Santorum, in an essay in the Philadelphia Inquirer, patiently explained that most scientists don’t do science the way he does. Here are some of his thoughts:

In 2001, I offered a legislative amendment about teaching the subject of evolution, [It says] “where biological evolution is taught, the curriculum should help students to understand why this subject generates so much continuing controversy/” But the scientific “community” claims there is no controversy.

[I] have learned to be skeptical of “scientific” claims, particularly those at war with our common sense – like the Darwinists’ telling us for decades that we are just a slightly higher form of life than a bacterium that is here purely by chance, or the Environmental Protection Agency’s informing us last week that man-made carbon dioxide – a gas that humans exhale and plants need to live, a gas that represents less than 0.1 percent of the atmosphere – is a dangerous pollutant threatening to overheat the world.