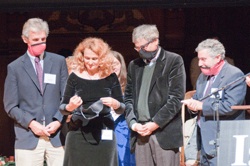 Science Friday‘s annual Ig Nobel broadcast happens today. Ira Flatow, Charles Bergquist and the rest of the Science Friday team have edited the Ig Nobel Prize ceremony into a cornucopic radio hour. Listen on NPR stations, or listen on the web. Broadcast times vary (in many US east coast cities, the broadcast begins at 2 pm), so check with your station. (Science Friday is a two-hour program; the Ig will be the first of those hours.)