Ig Nobel Prize-winningwork of Andre Geim and Michael Berry, Yuanming Liu, Da-Ming Zhu, Donald M. Strayer and Ulf E. Israelsson have used magnets to levitate mice. Their study in the journal Advances in Space Research tells all, or at least much, or what they did. Called “Magnetic levitation of large water droplets and mice“, it says: 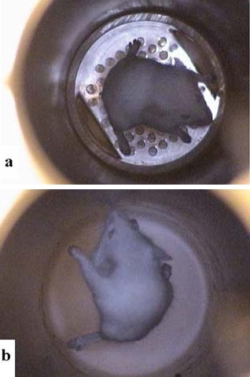 In a years-later follow on the We report successful levitation of large water droplets and mice using a newly built variable gravity simulator. The simulator consists mainly of a superconducting magnet with a room temperature accessible experimental levitating space. The superconducting magnet generates a field and field gradient product that is large enough to levitate water and many other common liquids. The warm bore of the magnet has a diameter of 66 mm, large enough to levitate small mammals. We demonstrate that water drops up to 50 mm in diameter and young mice can be levitated in the system.

Livescience has a report about the report, and reproduces one of its photos.

(Thanks to investigator Hugh Henry for bringing this to our attention.)