Watson published a report in the Journal of Applied Behavior Analysis, describing both his method and the relentless manner in which he tested it.

Watson, then at Mississippi State University, is now a professor at Miami University of Ohio. He carried out the experiment in three men’s toilets. Each chamber had a history writ large, and small, in many different hands. The study says that “during the preceding months, each of the walls had been repainted numerous times due to the proliferation of graffiti”. 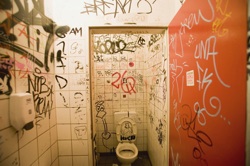 Each day, Watson and his minions meticulously counted how many marks were on each wall. They tallied each letter, number, or piece of punctuation. Other shapes called for special assessment. The study describes one typically difficult example: “A drawing of a happy face was counted as five marks (one for each eye, one for the nose, one for the mouth, and one for the circle depicting the head).”

BONUS: The Guardian assembled a gallery of toilet graffiti (of which one image is displayed here,at right).