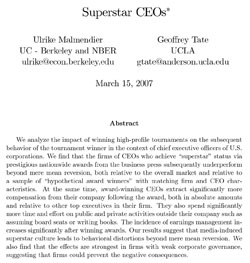 “We analyze the impact of winning high-profile tournaments on the subsequent behavior of the tournament winner in the context of chief executive officers of U.S. corporations. We find that the firms of CEOs who achieve “superstar” status via prestigious nationwide awards from the business press subsequently underperform beyond mere mean reversion, both relative to the overall market and relative to a sample of “hypothetical award winners” with matching firm and CEO characteristics. At the same time, award-winning CEOs extract significantly more compensation from their company following the award, both in absolute amounts and relative to other top executives in their firm.”

(That’s an excerpt from the article “Financial Meltdown,” Published in AIR 15:3.)