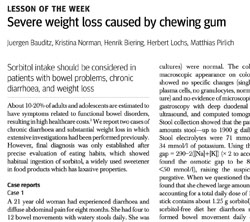 (Thanks to Erwin Kompanje for bringing this to our attention.) The authors, at Charite Universitatsmedizin in Berlin, Germany, report:

Both our patients consumed large amounts of sorbitol, which belongs to the family of polyalcohol sugars, like mannitol and xylitol, some of which are regularly used as laxatives.
However, sorbitol is also used as a sweetener in many sugar-free foods and drug products…. Sugar-free or low sugar foods are increasingly eaten in Western countries by people without diabetes because they are low in calories and are less likely than sugar to cause caries. As possible side effects are usually found only within the small print on foods containing sorbitol, consumers may be unaware of its laxative effects and fail to recognise a link with their gastrointestinal problems.

(That’s an excerpt from the article “Improbable Medical Review,” Published in AIR 15:3.)