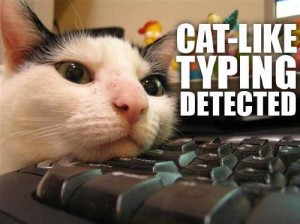 Martin County Sheriff’s detectives didn’t buy it when a 48-year-old Jensen Beach man claimed that his cat was downloading child pornography on his computer.

Keith R. Griffin, of the 3600 block of Northeast Jeannette Drive, was charged Wednesday with 10 counts of possession of child pornography after detectives found more than 1,000 child pornographic images on his computer, according to a news release.

Griffin told detectives he would leave his computer on and his cat would jump on the keyboard.

The 2000 Ig Nobel Prize in Computer Science was awarded to Chris Niswander for inventing PawSense, software that detects when a cat is walking across your computer keyboard and locks out that input to prevent any unintended actions.

We asked Mr. Niswander, in his capacity as an expert in Feline/Computer Relations, to comment on Mr. Griffin’s case. He responded:

[W]hen I was first market-testing PawSense at a cat show, I did hear stories from some people about how their cats would habitually walk on their computer in patterns that repeatedly sent emails and that kind of thing.

Keyboard shortcuts in most software do let key presses alone accomplish most or all of the things that can be done with a mouse.

One of my favorite cat computer stories is about the guy whose girlfriend bought him PawSense because his cat lost several hundred dollars ‘walking around in’ software that permits rapid day trading in stocks and other securities.

I never considered that PawSense can be hazardous to criminals by reducing their opportunities for alibis.

In general, you can find a lot of opportunities to get into trouble with random typing: just do a web search for ‘keyboard shortcuts’.

No word yet if Mr. Niswander will be called as a witness on behalf of Mr. Griffin’s defense.

(Special thanks to I Can Has Cheezburger for permission to reuse their image, above, for this post.)