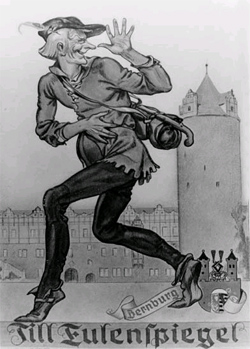 It was mid winter when Till Eulenspiegel arrived at Ascherleben. Times were hard, but finally he found a furrier who was willing to take on an apprentice, and he was put to work sewing pelts. Not being
accustomed to the smell of the curing hides, he said, “Pew! Pew! You are as white as chalk, but stink like dung!”

The furrier said, “If you don’t like the smell, then why are you a furrier’s apprentice? It’s a natural smell. It’s only wool.” Eulenspiegel said nothing, but thought, “One bad thing can drive another bad thing away.” Then he let such a sour fart that the furrier and his wife had to stop working.

The furrier said, “If you have to fart like that, then go out into the courtyard. There you can fart as much as you like.” Eulenspiegel answered, “A fart is more natural and healthier than the stench of your sheep pelts.”

The furrier said, “Healthy or not, if you want to fart, then go outside.” Eulenspiegel said, “Master, it would do no good, because farts don’t like the cold. They are used to being in a warm place. That’s why if you let a fart it always rushes for your nose. It goes from one warm place to another.”

The furrier said nothing, for he could see that Eulenspiegel knew nothing of the furrier trade and was a rogue at that. And he sent him on his way.

(Thanks to Maddalena Feliciello for bringing this to our attention.)