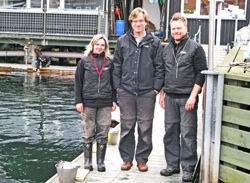 The first Ig Nobel Tour of Denmark starts tomorrow, held in conjunction with The Festival of Research.
All events are free—but you must obtain tickets (here are details, in Danish and in English).

Odense, April 23, 2:00 pm. University of Southern Denmark, in the main campus restaurant, half an hour after the opening ceremony of the Days of Science.

Magnus Wahlburg has done much of the organizing that made this possible, for which we thank him very much! (The photo shows Magnus, between two colleagues, near a body of water that may contain herrings.)