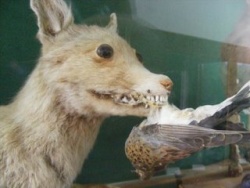 Guzelyurt Museum of Nature and Archaeology is my least favourite museum of all that I have been to. I admire the fact that northern Cyprus has a museum dedicated to its natural and historical treasures, but I can’t help but feel a little disheartened by the way the specimens look, and the fact that many are misidentified.

[Consider this photo of the red fox (Vulpes vulpes), the well known fox from most of the Northern Hemisphere and Australia as well…. What can I say? My mum was giggling when she saw the poor thing in the museum, and my sister Mini commented on the photo on Facebook, saying the thing would give her nightmares. If the specimen was meant to give the visitor an idea of what a living fox looks like, I think Guzelyurt’s atrocities (there were more than one!) would not get that point across.