Steve Darwin is the thousandth PhD to join Project Steve. His identity was revealed last Friday at the AAAS annual meeting, in Chicago, at a special Improbable Research press briefing and again, three hours later, at the Improbable Research show, which was open free to the public [see photo at the bottom of this blog post]. This was just one part of the show.

People’s Daily [China] published a report about the events. It begins:

At the American Association for the Advancement of Science (AAAS) 2009 annual meeting, the world’s largest science gala, Ig Nobel winners and organizers stole the show on Friday…. the Ig Nobel winners and organizers as usual pulled a large crowd with unusual and sometimes stunning performances. Dan Meyer, a 2007 Ig Nobel Medicine Prize winner, demonstrated a 15-inch and a 30-inch-sword swallowing respectively in the afternoon and at night on Friday. A female audience was invited to pull the sword out of his mouth after the performance. As expected, she screamed…

Click here for a briefer Physics World account. There has also, of course, been some twittering. An NCSE press release explains, more or less, about Professor Darwin [pictured here] and Project Steve:

Dr. Steve Darwin — no relation to Charles — has been a botanist and evolutionary biologist for over thirty years. Darwin is not only a professor of ecology and evolutionary biology at Tulane University in New Orleans, but also Director of Tulane’s herbarium, which boasts 115,000 specimens, with a focus on flora from the southeastern United States. He is the author of thirty-five publications in the field of plant biology….

Named in honor of Stephen Jay Gould, NCSE’s Project Steve began as a tongue-in-cheek response to creationist lists of alleged Darwin-doubting scientists. Project Steve encourages scientists named Steve (or Steven, Stephen, Stephanie, Stefan, Stefano, Etienne, Esteban, Tapani …) to sign up and publicly support evolution. Because 1% of Americans are named Steve or Stephanie, the 1000 Steves represent the thousands of scientists who affirm and support the study and teaching of evolution.

After the show, Ig Nobel Prize winner Dan Meyer and I visited the Nick Digilio show on WGN radio, where Dan swallowed a sword and devoured a light bulb. Click here to hear and see that: 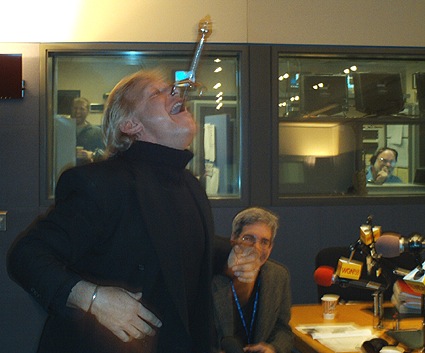