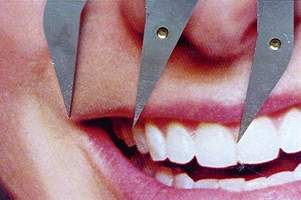 Dr Eddy Levin, of Harley Street in London, puts a golden ratio, not just golden teeth, into people’s mouths. Levin has been at this for a while. In 1978, he wrote a study called Dental Aesthetics and the Golden Proportion, which was published in the Journal of Prosthetic Dentistry.

The golden ratio is a special number that has caught the eye and imagination of mathematicians, artists and now, thanks to Levin, dentists. It’s the number you get when you compare the lengths of certain parts of certain perfectly beautiful things (among them: snail shell spirals, the Parthenon in Athens, and Da Vinci’s The Last Supper). You’ll find that the ratio of the bigger part to the smaller equals the ratio of the combined length to the bigger. That ratio, that number, is always the same, ever so slightly bigger than 1.6180339.

Levin explains that many years ago he was studying maths and trying to find out what made teeth look beautiful. “It was at a moment,” he says, “like when Archimedes got into his bath, that I suddenly realised that the two were connected – the golden proportion and the beauty of teeth. I began to put this into practice….