The June 6, 2008 issue of The Daily Telegraph contains a rare newspaper report about a fine point of taxonomy: 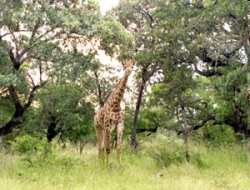 According to a report in the Yedioth Ahronoth newspaper, vets were asked to treat an adult, female giraffe at Israel’s largest zoo, the Safari Park in Ramat Gan.

The team, led by Professor Zohar Amar, took a routine sample of milk and found that it clotted in the way required by Jewish law for kosher certification.

They submitted more milk for verification by the rabbinical authorities and the paper reported that a ruling was made that giraffe meat and milk are acceptable for observant Jews.