The image below shows a portion of the Boston Globe’s Boston.com web site on June 21, 2008. It is, or may be, a puzzle designed to delight and madden semioticians, business researchers, and other scholars. 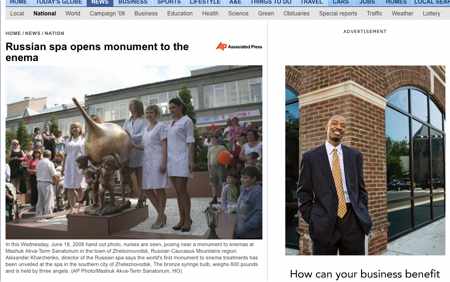 As you can see, on the left is a news photo with this caption:

In this Wednesday, June 18, 2008 hand out photo, nurses are seen, posing near a monument to enemas at Mashuk Akva-Term Sanatorium in the town of Zheleznovodsk, Russian Caucasus Mountains region. Alexander Kharchenko, director of the Russian spa says the world’s first monument to enema treatments has been unveiled at the spa in the southern city of Zheleznovodsk. The bronze syringe bulb, weighs 800 pounds and is held by three angels. (AP Photo/Mashuk Akva-Term Sanatorium, HO)

On the right is a man in a business suit above the large phrase “How can your business benefit.”

Scholars of a certain mind will scratch their heads and scribble their pencils over this. We, like them, would love to know the answer.

(Thanks to investigator Ron Josephson for bringing this to our attention.)