“Please see the attached image, where I have drawn in all similar occurrences of spaces between words that appear to have some linear relationship (at least until I got bored). Here the instance of a ‘line of five’ doesn?t seem all that uncommon, given that there are at three other instances of lines 5 or longer within the same paragraph (the count may depend on how generous one is in counting a line as straight).

I would propose that if we count the length of all lines as a variable X, and use length 2 as the obvious minimum, that the distribution of lines length 2 or longer will follow approximately a Poisson distribution. That is where X is the length of lines, for Y = X ? 2, Y ~ Poisson (lambda). In this example, lambda might be a little more than one. I will let someone else count the lines through […]”. 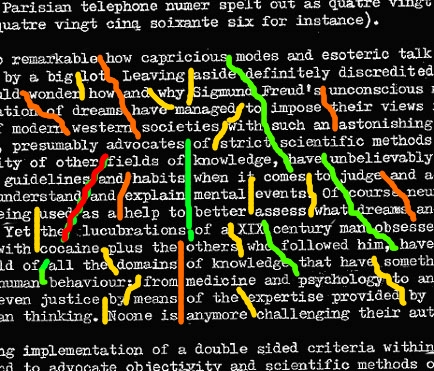