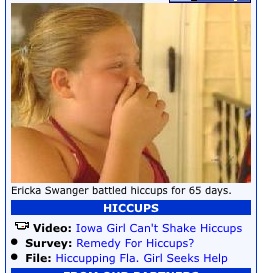 Yet again (click here to see a celebrated previous instance), doctors confronted with a medical problem ? one for which a cure is known ? seem not to have bothered reading the medical literature. The cure was described in the study “Termination of Intractable Hiccups with Digital Rectal Massage,” by Francis M. Fesmire (Annals of Emergency Medicine, vol. 17, no. 8, August 1988 p. 872); it led to Dr. Fesmire’s receipt of the 2006 Ig Nobel Medicine Prize.

The new case was reported on June 19, 2008 by television station WISCTV:

OMAHA, Neb. — A chronic case of the hiccups has an Iowa woman looking for a cure for her daughter.

Dawn Swanger called Omaha television station KETV because her daughter, Ericka, 11, started hiccupping in April as she sat in her Missouri Valley classroom and hadn’t stopped.

“It started April 1,” said Ericka, speaking through hiccups. “We were in English class at school, and it was no big deal. Then, a couple weeks later, we started getting worried. They hurt, but not that much any more. I got used to the pain.”

The family has tried all kinds of home remedies, including a contraption called a “Hic-Cup.”

(Thanks to investigator Chris S. for bringing this to our attention.)