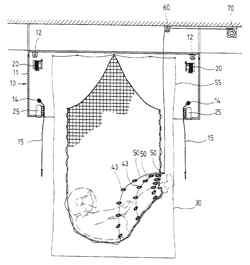 Kuo-cheng Hsieh won the 2007 Ig Nobel Economics Prize for patenting a device that catches bank robbers by dropping a net on them. But amid the glamour of the announcement, some of its charms may have gone unnoticed….

Hsieh’s patent has had at least one recorded effect: it inspired Zoltan Egeresi in the fight against terrorists.

Two years after New York and Washington were attacked by hijacked planes, Egeresi, a Californian inventor, filed a patent application for an “anti-hijacking system”. In an ingenious commingling of ideas, Egeresi adapted the Hsieh bank-robber-trapping technology as a way to simplify a rather costly anti-hijacker system devised in the early 1970s by Gustano A Pizzo….

So says this week’s Improbable Research column in The Guardian. It’s a companion to last week’s column.