Scholars of ritual have a new kind of domestic trinket that cries out, if silently and with full patent protection, for study. The object is described in U.S. patent# 7,308,741, which was granted December 18, 2007 to Mary F. Rydberg of Scottsdale, Arizona and Sharon M. Robinson of Fountain Hills, Arizona. 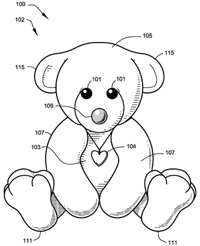 A system for storing cremated remains in one or more holders that may be comfortably held by an individual. The present invention comprises a “plush container”, such as a stuffed animal…

The invention is marketed under the name “Eternahugs,” with lots of legalities.

One incarnation is called “EternaBears.” The vendor say of it: “The EternaBear originated because of a common human emotion, grief.”

Another variation is called the EternaPillow. It is, one presumes, for the individual who’d like to rest their head on the dead.

(Thanks to Martin Gardiner for bringing this to our attention.)