We like improbable research, obviously. But we often puzzle at a rule of thumb some people use.

Their guiding principle:
Improbable explanations are probably the best explanations — because they are improbable.

This rule of thumb is suggested by two items in the news this week. One is in a February 12, 2007 CNN/AP dispatch: 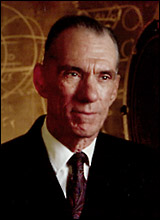 PRINCETON, New Jersey (AP) — The extrasensory perception lab at Princeton University will be shuttered at the end of the month. Maybe you already knew that.

The Princeton Engineering Anomalies Research laboratory will close after 28 years of studying ESP and telekinesis, research that embarrassed university officials and outraged the scientific community.

PEAR’s founder, Robert G. Jahn, said the lab, with its aging equipment and dwindling finances, has done what it needed to do.

“If people don’t believe us after all the results we’ve produced, then they never will,” Jahn, 76, former dean of Princeton’s engineering school and an emeritus professor, told The New York Times for Saturday editions.

York Psychic Museum has shut due to unforeseen circumstances, the York Press reports.

Astrologer Jonathan Cainer, who opened the museum in 2003, admitted that he’d been welcoming just 100 people a week through the doors, and had accordingly decided to temporarily hang up his crystal ball.

(Thanks to investigator Lara Ricci for bringing the first item to our attention and investigator Kristine Danowski for alerting us to the second.)