The fourth Ig Nobel Tour of the UK starts tomorrow. During the UK’s National Science Week, six Ig Nobel shows will be given in five cities. As I (together with several other Ig Nobel prize winners) will be part of that tour, Marc Abrahams, editor of the Annals of Improbable Research, father and master of ceremonies of the annual Ig Nobel Prize Ceremony, and head of improbablecom.wpcomstaging.com, kindly keeps me informed about the final details.

Here is a dialogue by e-mail between Marc Abrahams (MA) and Pek van Andel (PvA), one of the Ig Nobel prize winners who will also be one of the speakers. I deleted some of the more explicit parts and very personal confessions.

MA (22 Feb, 21.43h): ?What is your planned topic for this tour? Like last year, I am asking everyone who is a ?repeat? participant to spend one minute discussing the thing that won the prize, and then four minutes discussing something new. What is your something new?? 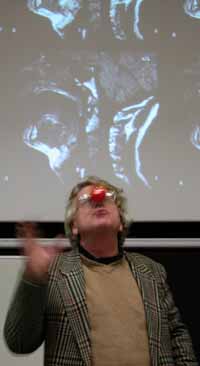 PvA (28 Feb, 12.56h): ?I am thinking about three items. (1) After the ?love between magnets? study as Science called it in an editorial, I organized a scan of a ?rectal toucher?. Without pants and underpants I entered the MRI-scanner and the urology professor here at UMCG, Han Mensink, put his index finger as deep as possible in my ass to palpate my prostate. At that very moment a scan of the whole rectal toucher was made. This image was published in the NTvG (Nederlands Tijdschrift voor Geneeskunde) to illustrate an urological article about the state of art of the rectal toucher. I can show this first scan in history of the diagnostic act of an index finger. (2) I still work on serendipity, and till now I found forty patterns. I can tell something about the most funny types of serendipity with crazy examples. The motto is: earnestness excludes playfulness, playfulness does not exclude earnestness. (3) My last accomplishment is that I am now – at least on paper – the first ?total donor? in Holland. After my death my organs and/or tissue are available for transplantation and after that the rest of my body is available for the section room of the Anatomy Department of UMCG. What do you think of all this?

MA (12 February 2006, 14.27): ?Congratulations on your digital rectal triumph, if triumph is the word. ?Serendipity? will be a good topic for your talk. So, I challenge you to find a way to use your five minutes like this: 1.0 minute – the achievement that won you the Ig Nobel Prize; 3.5 minutes – serendipity; 0.5 minutes – the story of how you became the first ?total donor? in Holland.?

PvA (12 February 2006, 15.45): ?Thank you. It is still a pity that the image was not published in the American Journal of Urology. I accept your challenge, and will glue the three together: the observations on the coitus scan were not anticipated and the last social innovation of the ?total donorship? is an example of pseudo-serendipity. And what about the rectal scan? Shall I show it? Tell me as soon as possible.?

MA (12 February 2006, 15.58): ?Sounds delightful. Let’s not use the rectal scan on this tour. I would like to run it in a future issue of the Annals of Improbable Research, though!?

MA (12 February 2006, 16.47): As many as it is convenient for you to bring. We can always find a use for a bull penis. I do, however, prefer the name you used for them when you walked into the room at Oxford last year. Your English is always extra-interesting on the first day or so when you begin speaking it regularly. You called them ?cow penises?.?

Anybody who wants to (1) see if Pek van Andel (PvA) really exists, (2) verify if he will not show his (own) rectal image scan, and (3) learn about the possible use of a cow?s penis, should come to at least one of the six shows of the Ig Nobel tour of the UK during National Science Week 10-17 March 2006.

[EDITOR’S NOTE: These photos are from the 2005 Ig Nobel Tour. They were taken by Kees Moeliker.]