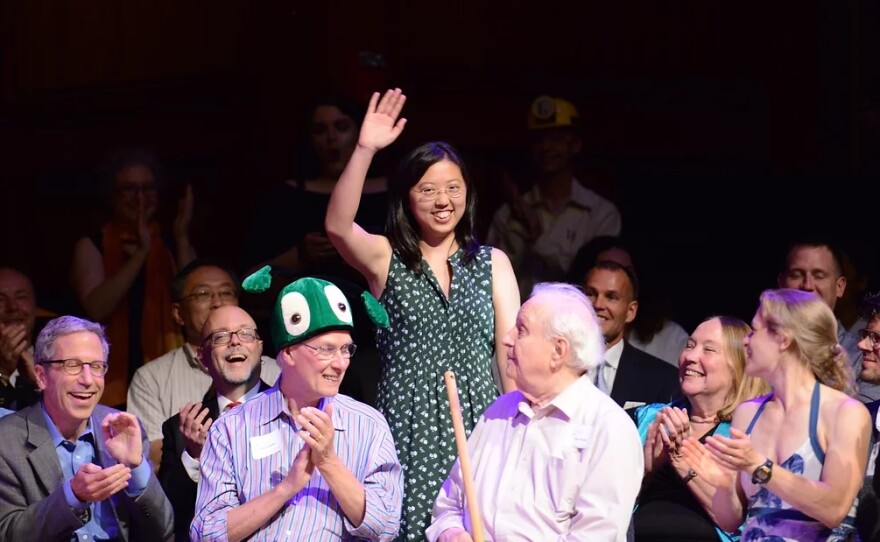 The radio program Audacious with Chion Wolf [on Connecticut Public Radio] took a joyous, 50-minute adventure ride into the world of the Ig Nobel Prizes. Listen to it online: “Laugh and then think: What it’s like to win the Ig Nobel Prize”

Here’s the Audacious summary of what you’ll hear:

Almost 1000 people have won Nobel Prizes. But only 300 have won IG Nobel Prizes! That’s the award honoring achievements that first make people laugh, and then make them think. In this episode, meet the creator of the prize, and three people who’ve won it!

Marc Abrahams: Founder of the Ig Nobel Prize Ceremony in 1991, celebrating achievements that “make you laugh and then think”. He is also the co-founder and editor of the magazine, Annals of Improbable Research
Kees Moeliker: Dutch biologist, ornithologist, and director of the Natural History Museum Rotterdam. He won an Ig Nobel Prize in Biology for his study of homosexual necrophilia in male mallards in 2003. He is also the founder of Dead Duck Day, which is held annually on June 5th
Pavlo Blavatskyy: Professor of economics at Montpellier Business School. He won an Ig Nobel Prize for Economics in 2021 for his study correlating the perceived corruption of politicians and their body weight
Patricia Yang: A two-time Ig Nobel Prize winner in Physics. The first was in 2015 for testing the biological principle that nearly all mammals empty their bladders in about 21 seconds (plus or minus 13 seconds). She won again in 2019 for studying how wombats make cubed poo