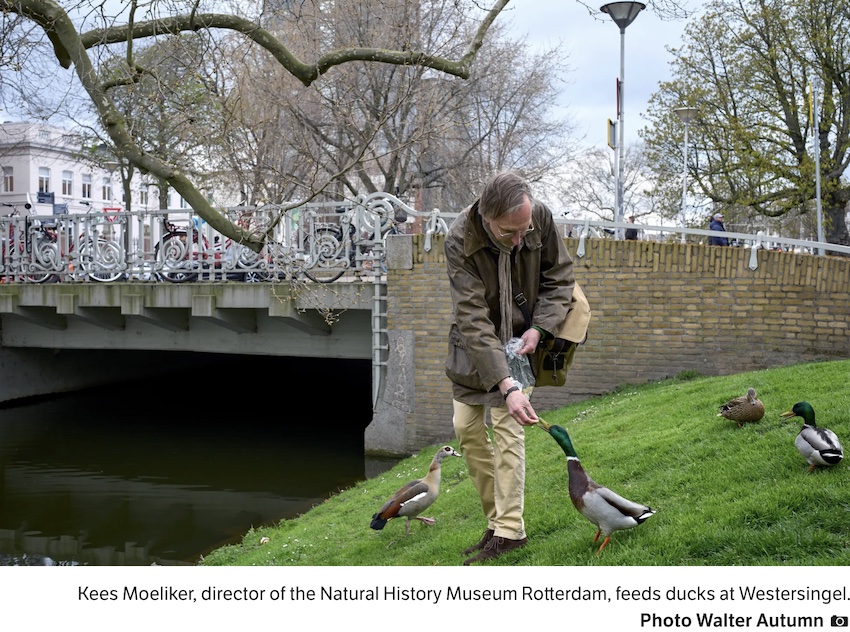 The city of Rotterdam plans to prohibit people from feeding bread to ducks. The news organization NRC reports, on April 7, 2022, about the pushback on that, especially from the city’s most eminent duck biologist. Here is a machine translation (into English) of that report:

Doubts in Rotterdam about the usefulness of the ban on feeding city birds.

FEEDING BAN: A ban on feeding city birds in Rotterdam should prevent the animals from getting sick. Among the ducks near a canal, biologist Kees Moeliker is critical of the measure.

As soon as Kees Moeliker catches sight of ducks, he takes black, folding binoculars from his bag. Through the lens he studies the group sitting further down in the grass along the Rotterdam Westersingel. “They are mallards,” Moeliker says. He is a biologist and director of the Natural History Museum Rotterdam. “I’m glad we found them so quickly, because the mallard is in bad shape. The numbers are declining, by as much as 30 to 40 percent. Duck lovers are very concerned.”

From his shoulder bag, Moeliker, who became world famous as the duck man through his study of homosexual necrophilia among drakes, takes a bag with leftover bread. A corn sandwich is cut into neat cubes. “I got this off the breadboard this morning. Shall we see if we can tempt the ducks for a quick bite?”

He throws a handful of pieces of bread into the water. A flying seagull discovers the loot first, but continues to circle above it without fishing the bread out of the water. As a result, the ducks’ attention is quickly aroused: two drakes – drakes – rise from the grass and swim towards the leftover bread.

“With small pieces of bread you can feed in a targeted manner,” says Moeliker as he squats down by the water’s edge. After a few bites, the ducks climb ashore and snatch the bread from his hand. “This is the fun of feeding ducks, the direct contact with the animals. And there is much more bird life to discover.”

Whoever wants to feed bread to the ducks must hurry. From 1 July, the municipality of Rotterdam wants to ban the feeding of urban animals, following a motion by the Party for the Animals (PvdD). The decision still has to be approved by the city council in June, but that will probably not be a problem.

The feed ban is intended to prevent city birds from becoming ill or dying earlier due to bread and other food residues, the municipality writes in the statement.press release . The measure also prevents nuisance from pests that come to the food leftovers – in 2020 there were four thousand reports of rat nuisance. “Because these problems affect the entire city, the municipality has opted for a city-wide feed ban,” says a spokesperson for Stadsbeheer.

Moeliker shows himself critically among the ducks along the Westersingel. “The municipality uses the argument that bread is unhealthy for ducks. That is partly true: bread contains salt and is an unnatural food. If ducks only eat bread, it’s bad for them. Combined with other foods – the insects and aquatic plants they normally eat – it’s not much of a problem. That’s how ducks live in the big city.”

The just-fed ducks set a good example. After a few bites of bread they switched to the duckweed that floats along the bank. Then they dive back into the water and start ‘gobying’ just before the bank: head in the ditch, butt just above the water’s surface and kicking with the orange legs.

“This is how ducks get their food from the water,” says Moeliker. “Because of the treading water and rooting with the beak, the bottom clouds up and all kinds of things – water snails, crustaceans, seeds – come up to eat. So you see that after the sandwich they switch back to other food. Ducks take care of their own disc of five.”

No scientific evidence
Moeliker is not worried about duck deaths from bread: “I have not seen any scientific evidence for that. The current decline in the mallard population is not due to food, but to high chick mortality.” Ruud van der Velden, leader of the Rotterdam PvdD, cannot provide scientific evidence when asked, but does not agree with Moeliker. “We do see deaths from eating too much or unhealthy food. We are drawn to this by residents, for example in the Bloemhof district. The Bird Protection also says that bread is bad for ducks.”

Rotterdam is not the first city to introduce a ban. As early as 2016, the De Dommel Water Board banned feeding ducks in a pond in Vught in Brabant, after whole loaves of bread were thrown into the water a few times. This was followed by Amsterdam, The Hague, Leiden and Utrecht. The amount of the fine varies between 70 and 140 euros. According to Stadsbeheer, the fine in Rotterdam will be 100 euros.

“Sin,” says Moeliker. “The feed ban of the municipality of Rotterdam is actually a ban on dumping food leftovers.”

He walks to a pile of white rice further up in the grass, right next to a large black rat trap. Four ducks, an Egyptian goose with a crippled left leg and a city pigeon take turns pecking at it. “This inverted pan of rice, you have to provide information about it. That is not good for the birds and attracts vermin. But feeding sliced ​​pieces of bread is quite different from overturning a supper.”

Van der Velden does not want to distinguish between feeding children and people who dump leftover food. “All feeding is bad for the animals.” The municipality does not intend to make any exceptions. “A ban is a ban,” says Stadsbeheer.

According to Moeliker, the municipality ignores the educational function. “Feeding ducks is an accessible way in which city children come into contact with nature. You can count ducks and other birds, discuss their behavior and view the different species. It’s basically biology class in the middle of the city – thanks to a crust of bread. We shouldn’t ban that.”

There is a sentiment expressed in the Christian bible: “Man does not live by bread alone.” Moeliker is pointing out that neither do ducks.

Kees Moeliker is, as the NRC article mentions, director of the city’s natural history museum. In 2003 he was awarded the Ig Nobel Biology Prize, for publishing the first scientifically reported case of homosexual necrophilia in the mallard duck.

With many people wanting more info about this, Kees wrote a little essay that was broadcast this morning on national radio.