SIR,-The fact that my friend Professor Clifford Allbutt has found it necessary to vindicate English medicine against me fairly takes my breath away. I cannot, on re-reading my lecture, conceive what expression of mine could have given rise to such an erroneous interpretation of my intentions. The facts are simply these: Finding that some patients of mine, whom I had sent to Aix-la-Chapelle, and whose cases had proved refractory to both mercury and iodide preparations, had derived great benefit at the hands of the Aix-la-Chapelle physician from the administration in large doses of two sarsaparilla preparations ordinarily used by him, of which the one, Zittmann‘s, is universally known, whilst the other, Kobert’s, had been so far unknown to myself, I thought it simply right to give the formula of the latter, and to recommend the administration of sarsaparilla in these forms in my lecture in order to let other patients derive the same benefits that my patients had obtained. That is all, and I really do not think that anything could be more natural than that.

There may be a reader of two of this blog who is under the age of 100, and who may be unfamiliar with sarsaparilla. Sarsaparilla is the name of a soft drink, and also of several different kinds of vegetation.

There are connections between Sarsaparilla and the world of music. Intrepid persons who have excessive curiosity can begin to pursue those connections in the may 1959 issue of Minerva Farmaceutica, and also in this video performance of the song “Rufus Xavier Sarsaparilla”:

…and also in sheet music for the song “Dr Thomson’s Triumphal March“: 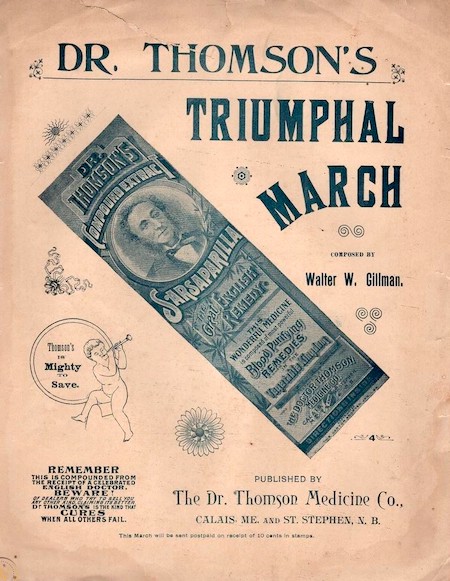