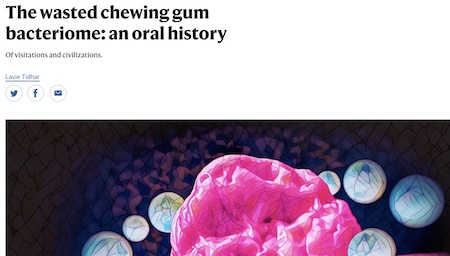 In the beginning the world was formed, and for a long time it was perfect in shape but lifeless. The world travelled through the void in that form, until great forces worked upon its pliable body. The priests speak of entities larger than universes, with teeth greater than worlds. They speak of a Masticating and whisper of the Great Chewer, who transformed the world and first seeded it with life.

As scientists, we cannot confirm this hypothesis. We have found no evidence of giant aliens. Our world is ordered, full of life and ancient. We know that the Universe is filled with life similar to ours. That others have visited our world and that some of us, in turn, have ventured out on voyages of exploration and conquest. We believe other worlds like ours exist in the Universe in great profusion, and it is even possible not all of them are made of gum.

2.
Following the Great Chewing, the world travelled through the void…

Read the entire essay at Nature.