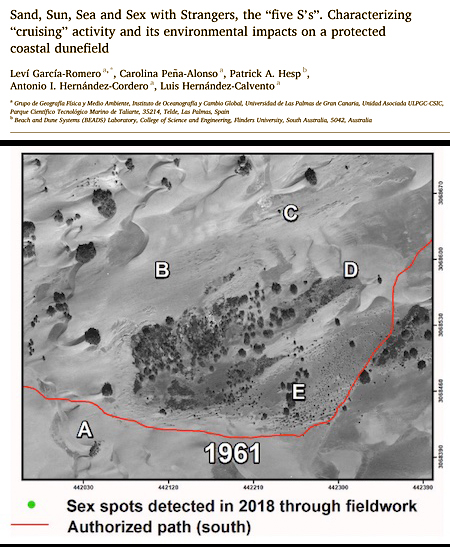 “Sand, Sun, Sea and Sex with Strangers, the “five S’s.” Characterizing “cruising” activity and its environmental impacts on a protected coastal dunefield,” Leví García-Romero, Carolina Pena-Alonso, Patrick A. Hesp, Antonio I. Hernández-Cordero, and Luis Hernández-Calvento, Journal of Environmental Management, vol. 301, January 1, 2022, no. 113931. (Thanks to Tom Gill for bringing this to our attention.) The authors, at Universidad de Las Palmas de Gran Canaria, Spain, and Flinders University, Australia, report:

“Cruising” is a concept which designates a practice of social interaction that consists of anonymous sexual encounters, mostly among homosexuals, in open and/or closed public spaces. Coastal dunes and beaches are examples of open public spaces where these sexual practices are widely carried out, to the extent that the so-called “Four S’s” (Sand, Sun, Sea and Sex) have even been defined in the literature…. In this work, the spatial distribution and the environmental impacts of cruising in a protected coastal dune system are characterized and assessed….

The results show that the distribution of the 298 identified sex spots, which occupy an area of 5763.85 m2, is related to the distance to authorized paths in the protected area, to the presence of bushy and dense vegetation, and to stabilized aeolian landforms or ones formed by vegetation (nebkhas)…. The activities developed in these sex spots impact directly on the aeolian landforms and on eight native plant species, three of which are endemic species.