Eigel Reimers, who shared a 2014 Ig Nobel Prize with Sindre Eftestøl, for testing how reindeer react to seeing humans who are disguised as polar bears, tells all about it, in an essay he wrote for the Norwegian Polar Club. It says, in part: 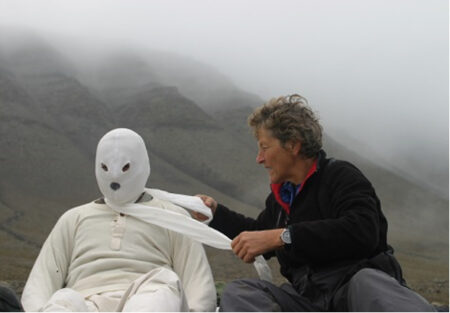 The question hung in the air and hung there: had the bear been on an unsuccessful reindeer hunt or was it a pure coincidence that one of the bears we had seen on some occasions in the areas was suddenly in the heart of Plurdalen? In a sense, we got an answer in the next couple of days. We returned to the base and Kristin and Mikkel who were informed over the radio about what we had observed and were in the process of preparing a disguise stunt.

We found everything we had of white equipment that included a white hat, white sports tape, white anorak, a yellow-white long down pants that could be pulled down over the boot shafts to over the ankle and white dope paper that could seal imperfections. Holes were cut in the hat for the eyes and a black snout was painted. I was to be a polar bear in our immediately improvised and creative attempt: to provoke Svalbard reindeer as a polar bear in order to be able to compare the different fear and flight distances with those we had measured with humans as provocateurs….

For a more formal report about this, see their study “Response Behaviors of Svalbard Reindeer towards Humans and Humans Disguised as Polar Bears on Edgeøya,” Eigil Reimers and Sindre Eftestøl, Arctic, Antarctic, and Alpine Research, vol. 44, no. 4, 2012, pp. 483-9.