The US Navy has obtained a patent (US patent #11082763, “Handheld acoustic hailing and disruption systems and methods”), here in the year 2021, for a device essentially the same as the invention that earned an Ig Nobel Prize in the year 2012 for a team of Japanese inventors.

New Scientist magazine reports on the new patent, with the headline “Sneaky US Navy feedback device could stop people being able to speak“. Here is a technical drawing from that new patent: 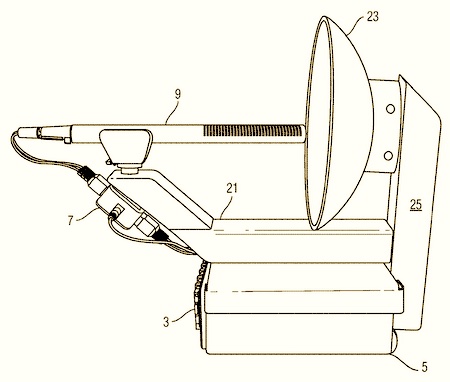 The 2012 Ig Nobel Prize for acoustics was awarded to Kazutaka Kurihara and Koji Tsukada, for creating the SpeechJammer — a machine that disrupts a person’s speech, by making them hear their own spoken words at a very slight delay.

(Thanks to Neil Judell for bringing the new patent to our attention.)

This US naval reinvention sounds distantly related, in an upside-down way, to the inventive use of sound that earned the Ig Nobel Peace Prize in the year 2000, for the British Royal Navy. The British Royal Navy was honored, that year, for ordering its sailors to stop using live cannon shells, and to instead just shout “Bang!”