The man who studied children’s glee and who cherished gourds, winning an Ig Nobel Prize for the former activity, has died.

In this photo you see him (escorted by minordomo Stefanie Friedhoff) at the 2001 Ig Nobel Prize ceremony: 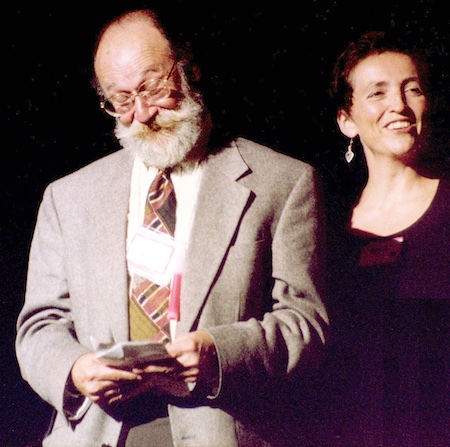 The 2001 Ig Nobel Prize for psychology was awarded to Lawrence W. Sherman, for his influential research report “An Ecological Study of Glee in Small Groups of Preschool Children.” (That study was published in the journal Child Development, vol. 46, no. 1, March 1975, pp. 53-61.)

Larry Sherman died a few weeks ago, as reported in an appreciative obituary:

Larry was a professor of Educational Psychology at Miami University in Oxford, OH for 39 years before retiring in 2010 and relocating to Fort Collins, CO in 2013. He was a jazz trumpet player and co-director of the Oxford Gourd and Drum Ensemble: OGADE, that performed both percussive and tonal gourd instruments…

Larry was active in… the American Gourd Society. He loved swimming and competed regularly at the United States Master Swimming meets both in Ohio and Colorado. Often, he would tell friends he won, but then would laugh that he was the only person swimming in that age division. His last swim meet was in May 2021.