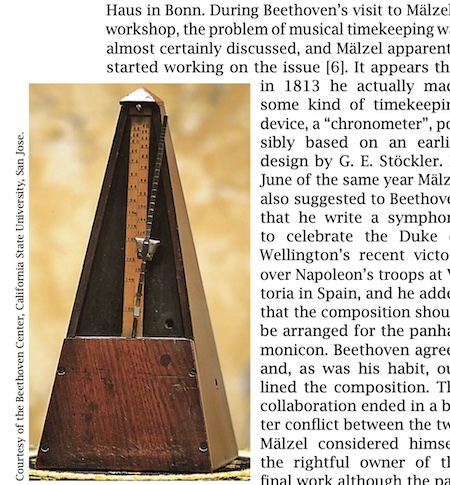 The pianist and musicologist Peter Stadlen (1910–1996), who devoted many years to studies of Beethoven’s markings, regarded sixty-six out of a total of 135 important markings as absurdly fast and thus possibly wrong. Indeed, many if not most of Beethoven’s markings have been ignored by latter day conductors and recording artists….

We investigate possible sources of error as to why Beethoven may not have been able to correctly note reliable and transferable time measures. We hope to demonstrate that there are possible mathematical explanations for the “curious” tempo markings—explanations that hitherto have not been considered except perhaps by Stadlen, who even went so far as to locate Beethoven’s own metronome.

Here is video of one of Beethoven’s composition being played, possibly with incorrect timing, by someone other than Beethoven: