The idea that flying insects might be naturally electrified – and that electric charges could be a significant factor in the pollination of plants – goes back nearly a century. (ref. Heuschmann, O. (1929), Über die elektrischen Eigenschaften der Insekten Haare, Journal of Comparative Physiology A: Neuroethology, Sensory, Neural, and Behavioral Physiology, 10(4), 594- 664.)

Dr Clara Montgomery who is an Honorary Research Associate at the School of Biological Sciences, University of Bristol, UK, researches such things – with a specialisation in bumblebees. 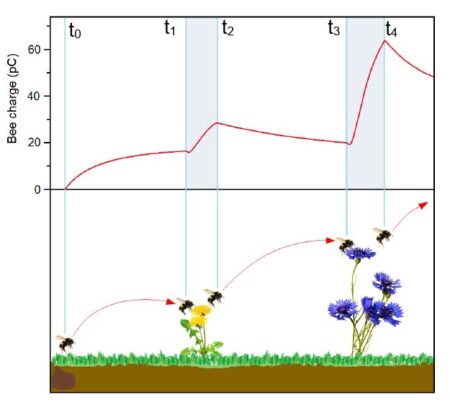 It’s not easy measuring the electric charge of a free-flying bumblebee, but Dr Montgomery has experimentally determined, for the first time, that bumblebees do indeed get electrified as they fly about.

“In this thesis I show that bumblebees gain electric charge during flight, and when foraging on flowers. I show that these charges are not limited to bumblebees in the laboratory but can be found on free-flying outdoor bees foraging in a natural environment.”
(Ref. The Electric Ecology of Bumblebees)

If you’re wondering just how charged-up a wild bumblebee can get, a subsequent investigation by Dr Montgomery (ref. Measurement of electric charges on foraging bumblebees (Bombus terrestris) Journal of Physics: Conference Series, Volume 1322, Electrostatics 2019 and Dielectrics 2019 8–12 April 2019, Manchester, UK) has shown that they routinely carry a positive charge – or, put another way, have a deficit of electrons as compared to the environment. It’s quantified in pico Coulombs (one pC = one trillionth of a Coulomb) as 116 ± 159pC, depending on the weather.

Note: The quoted figure for the charge appears to have a larger range of variation (± 159) than the figure itself (116) – perhaps indicating that although it’s normally positive, it can also be negative (i.e. the bee carries excess electrons), or zero.