This decades-old medical report has received surprisingly little attention from the baseball community. Baseball season is about to begin again, in the USA. Please alert anyone to whom this study could be useful: 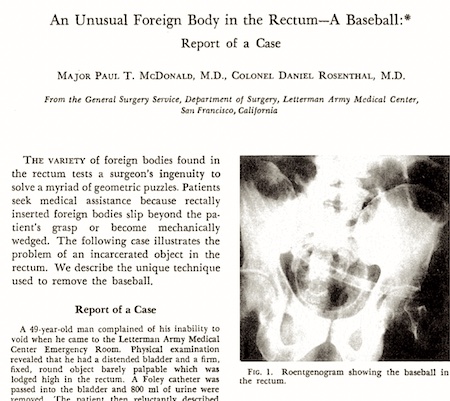 The following case illustrates the problem of an incarcerated object in the rectum. We describe the unique technique used to remove the baseball….

A 49-year-old man complained of his inability to void when he came to the Letterman Army Medical Center Emergency Room….The patient then reluctantly described his recent activity. He and his sexual partner had celebrated a World Series victory of the Oakland Athletics by placing a baseball (hardball) in his rectum because, as he put it, “I’m oversexed.” The presence of the baseball was confirmed by radiography (Fig. 1) and proctologic examination.

Under spinal anesthesia, the rectum was dilated and manipulations, including hooking the ball and pulling downward (enough to rip the cover of the ball), injecting air above the ball and giving downward traction, and obstetrical forceps delivery, failed….

[Eventually, an] assistant exerted digital upward pressure through the rectum and, combined with a force enough to raise the patient off the table, the ball was delivered through [a] colotomy.

This procedure differs, in most ways, from the traditional form of baseball’s hidden ball trick.