A moving bicycle, when no one is riding it, is more stable than many people expect, but it is not completely stable. Here’s a curious look into the how and why of that:

“It Takes Two Neurons to Ride a Bicycle,” Matthew Cook, at Caltech, demonstration at NIPS 4 (2004). 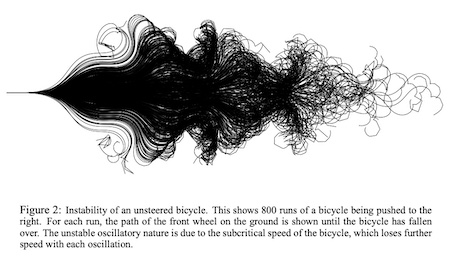 Past attempts to get computers to ride bicycles have required an inordinate amount of learning time (1700 practice rides for a reinforcement learning approach [1], while still failing to be able to ride in a straight line), or have required an algebraic analysis of the exact equations of motion for the specific bicycle to be controlled [2, 3]. Mysteriously, humans do not need to do either of these when learning to ride a bicycle. Here we present a two-neuron network1 that can ride a bicycle in a desired direction (for example, towards a desired goal or along a desired path), which may be chosen or changed at run time…

Figure 2: Instability of an unsteered bicycle. This shows 800 runs of a bicycle being pushed to the right. For each run, the path of the front wheel on the ground is shown until the bicycle has fallen over. The unstable oscillatory nature is due to the subcritical speed of the bicycle, which loses further speed with each oscillation.

(Thanks to Lieven Scheire for bringing this to our attention.)