Ten years ago, an emergency defense against airborne viruses (and much else) starred in the Improbable Research session at the Annual Meeting of the AAAS (Association for the Advancement of Science), held that year (2011) in Washington, DC. Johnathan Gitlin wrote about it—and took part in the event—for Ars Technica: 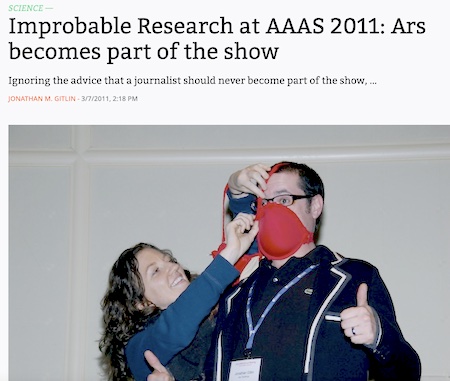 At this point, forgetting the adage that the journalist should never become part of the story, your author somehow ended up on stage. To provide some context, in 2009, Dr. Elena Bodnar, a Ukrainian physician, won the Public Health Prize for inventing a bra that can turn into a pair of emergency face masks, one for the wearer of the brassiere and one for a lucky bystander. We had been shown video footage of the 2009 ceremony, with a first amused, then slightly shocked-looking pair of Nobel laureates (Paul Krugman, Economics 2008; Wolfgang Ketterle, Physics, 2001) being used as demonstration models, as Dr. Bodnar removed her invention which she was wearing it at the time, and attached it to their faces. Dr. Bodnar then whipped out another bra, one half of which was then strapped to Orhan Parmuk (Literature, 2006).

As you can see from the photograph above, I helped model Dr. Bodnar’s invention, an example of which had been brought along.

That Prize-winning Brassiere, Then and Now

Here is the video to which he refers. It shows Dr. Bodnar accepting her prize— and giving the first public demonstration of her invention—at the 2009 Ig Nobel Prize ceremony at Harvard University.

Dr. Bodnar went on to perfect her design, and formed a company that now sells the invention, under the brand name Emergency Bra, worldwide.

This Year, at the AAAS Annual Meeting

The emergency bra has played a role at pretty much every AAAS Annual Meeting since 2010. The bra mask, and its inventor, will make a new appearance this year, in the Improbable Research session, on Thursday, February 11, from 2:15-3:15 pm, at the 2021 AAAS Annual Meeting, which is all happening online.