President Andrés Manuel López Obrador of Mexico announced today that he has the Covid-19 virus. He becomes the fifth co-winner of the 2020 Ig Nobel Prize for Medical Education known to have achieved that distinction, joining Boris Johnson, Jair Bolsonaro, Alexander Lukashenko, and Donald Trump. The other four co-winners have not yet announced that they have personally contracted the virus. (Co-winner Gurbanguly Berdimuhamedow has announced that no one in his country has ever had the virus.) 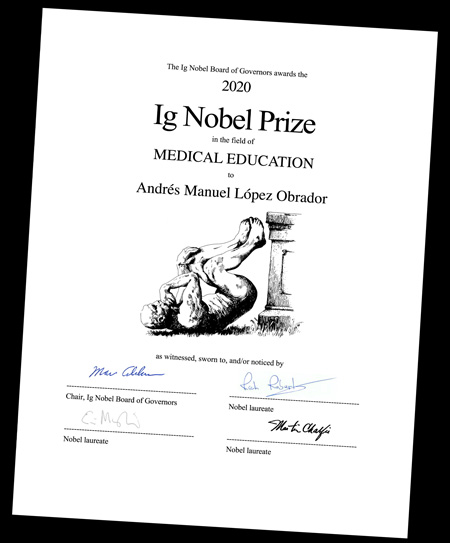 The 2021 Ig Nobel Prize for Medical Education was awarded on September 17 to Jair Bolsonaro of Brazil, Boris Johnson of the United Kingdom, Narendra Modi of India, Andrés Manuel López Obrador of Mexico, Alexander Lukashenko of Belarus, Donald Trump of the USA, Recep Tayyip Erdogan of Turkey, Vladimir Putin of Russia, and Gurbanguly Berdimuhamedow of Turkmenistan, for using the Covid-19 viral pandemic to teach the world that politicians can have a more immediate effect on life and death than scientists and doctors can.