When almost any new medical treatment has been proved effective, many people resist using it. Here’s one of many examples. This one is juicy. Andrew J.T. George wrote about it, in The Conversation: 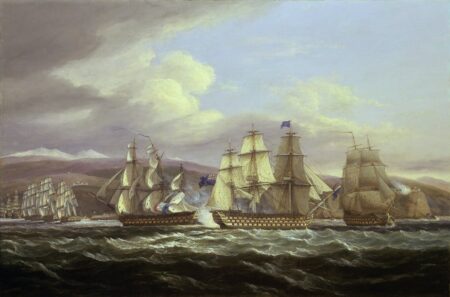 How the British defeated Napoleon with citrus fruit

Everyone knows that Britain’s conclusive victory over Napoleon was at Waterloo. The story of that day – the squares of infantry repulsing cavalry charges, the Imperial Guard retreating under murderous musket fire delivered by a red line of soliders, the just-in-time arrival of Field Marshal Blücher’s Prussian army – is one of excitement, horror and heroism. However, Britain’s biggest contribution to Napoleon’s defeat was much less romantic. It involved the first randomised controlled trial….

The ability of the sailors of the Royal Navy to operate for such long periods at sea was remarkable. For most of the 18th century, ships could only stay at sea for relatively short periods (six to eight weeks), without the sailors developing scurvy….

In 1753, Lind wrote a treatise describing [the] crucial experiment. While others had previously used citrus fruit to treat scurvy, this trial proved its effectiveness….

Delayed recognition
The story isn’t so simple, however. It involved big admiralty egos and political infighting. Lind’s treatise was largely ignored when it was published. It took decades of work by others – notably Thomas Trotter and Gilbert Blane – to fight for the adoption of lemon juice by the navy.

It was not until 1795, after Lind’s death, that his findings were fully adopted. Other countries were also slow to follow the British example. Even though Americans knew that British sailors drank lemon juice (the origin of the slang-term “limey”), scurvy remained a major problem for soldiers in the American Civil War.

One lesson is that it is not enough to do good science and assume any finding will be instantly adopted….