“SHIPWORMS’ COMPETITIVE SEX FRENZY CAUGHT ON FILM” is the headline on a press release from the University of Portsmouth. 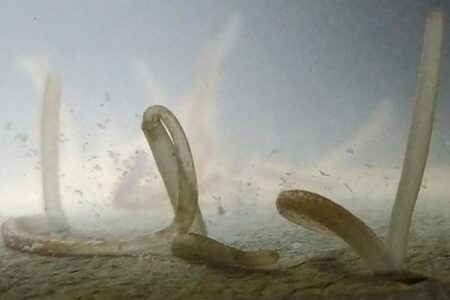 Below the heated headline, the body of the text begins:

Scientists, led by Dr Reuben Shipway, at the University of Portsmouth, studying the sex life of the giant feathery shipworm may be the first to have witnessed the wrestling and sparring between individuals during copulation.

The shipworm is a gender fluid, worm-like, wood-eating clam common throughout the world’s oceans and notorious for causing billions of pounds in damage by eating wooden ships, docks, piers and sea defences….

Details are in a paper published in the journal Biology Letters: “Mate competition during pseudocopulation in shipworms,” by J. Reuben Shipway, Nancy C. Treneman, and Daniel L. Distel.