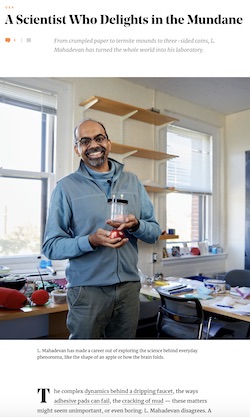 A Scientist Who Delights in the Mundane

Mahadevan uses mathematics and physics to explore commonplace phenomena, showing that many of the objects and behaviors we take for granted, and consequently give little thought to, are quite extraordinary upon closer examination… He even took on a process often dismissed as the dullest thing imaginable in his essay “Watching Paint Dry,” …

I’m not the kind of person who thinks some problems are bigger than others. In my mind, there is no hierarchy. What is frivolous and what is important seems like an irrelevant question. After all, nature does not care! …

I work on things that everyone can see and experience, but few care to think about deeply. As for the second question, does an artist, musician or writer think about applications? Why does science have to do so? It is human to be curious. That is enough, isn’t it?

But I should add that I’m not at all snooty about working on useful or practical things. I have patents on a few devices and algorithms, and just this year we developed potential protocols for mitigating the extreme costs of pandemics.

On the other hand, I also like doing things for the sheer fun of it, like, for instance, designing a fair three-sided coin in order to decide a three-way bet….

That research is documented in these studies: