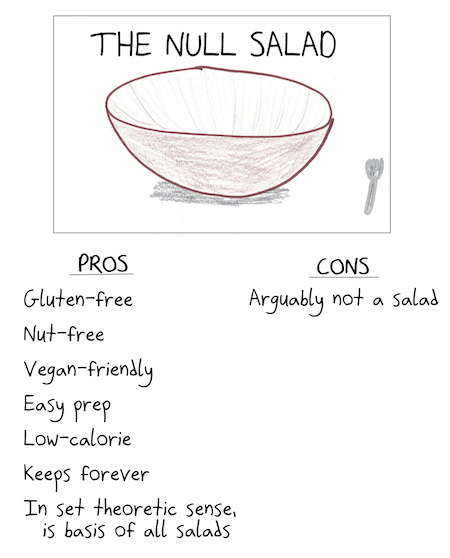 “If you have arugula, basil, celery, dandelion, and endive leaves, how many different tossed salads can you make?” That question, or something like it, was asked in a Math Bowl that I participated in back in high school, during my halcyon days as a mathlete. Actually, “halcyon days” are supposed to be calm days, and quiz-show-style math-smackdowns aren’t known for being calm.  It was certainly an un-halcyon moment when my Math Bowl teammates were urgently saying we should buzz in with the answer 32 to that salad question, and I was saying we needed to figure out whether the judges would think that a bowl containing no ingredients at all was a valid salad.  While we were debating the issue, the other team buzzed in with the answer 32, only to be told “That is incorrect.” Our team immediately buzzed in with the answer 31, which seemed likely to be the answer the judges were looking for.

We got the points, but I liked the other team’s answer better. The idea of an empty salad might seem like a purely mathematical fancy, but half a dozen years later I saw a restaurant menu that offered the null salad, or rather “Nowt, served with a subtle hint of sod all” (for the unbeatable price of 0 pounds and 0 pence)….