John Senders, 2011 Ig Nobel Prize winner (for his 1960’s experiment in which he drove an automobile on a on a major highway while a visor repeatedly flapped down over his face, blinding him) gets some new attention for his doctoral thesis, which is not as well known as as the driving experiment. 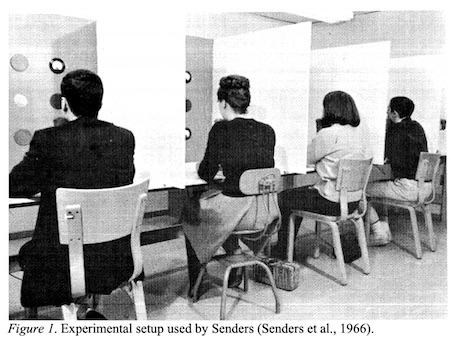 “In this thesis, Senders described experiments in which he asked participants to view a bank of dials with randomly moving pointers. This experimental configuration was inspired by the paper ‘Eye movements of aircraft pilots during instrument-landing approaches‘ by Fitts, Jones, and Milton (1950).”