A study called “A Case Report of a Botulism Outbreak in Beef Cattle Due to the Contamination of Wheat by a Roaming Cat Carcass: From the Suspicion to the Management of the Outbreak” has been published by a research team in France. 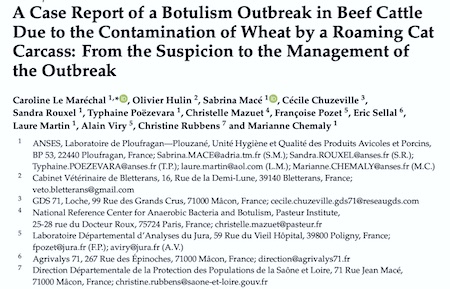 An earlier report by a team in Australia, about a different incident, concerns what would appear, from the writing, to be a doubly dead cat. The study, called “Aggregation in quads but not pairs of rats exposed to cat odor or bright light”, includes this passage:

The predator odor stimulus was a 2 g ball of cat fur obtained from a dead cat carcass acquired from the company Australian Feral Pest Management.

Those are but two of science’s curious cases involving cat carcasses. If you know of other examples—good examples, not just examples, we might enjoy hearing about them.